It’s no longer a secret that Singapore lays claim to a superior cocktail scene. A handful of World’s 50 Best awards, a migration of Western bartenders into the heart of the city-state, pools of ink spilled in its praise—it’s impossible to ignore that something special is going on here.

But beyond the buzz, there remains a certain mystery as to what, exactly, defines the Singaporean style. If London and New York are keepers of the flame and Los Angeles and San Francisco the ingredient-driven bon vivants, where does Singapore fall in the pantheon? Although the city’s bartenders are primarily focused on pushing their craft forward, they now find themselves as marquees players on a global stage. It’s time they name their game.

For nearly a century, Singapore’s sole contribution to the world of cocktails was its eponymous Gin Sling, fashioned at the Long Bar of the historic Raffles hotel in 1915. That all changed in 2011, with the opening of 28 Hong Kong Street.

“Back then, people cited many excuses as to why Singapore and Southeast Asia was ‘hopelessly resistant’ to elevated drinking options,” says Michael Callahan, who helped launch the now-iconic drink destination. “Truth be told, it was lack of product, brutal staff shortages and fear to break the mold that kept most operators from committing to craft cocktail programs.”

At the time, bars (read: clubs) meant bottle service, predictably high-end vodka and Champagne. Little else was available from the monolithic distributors dominating the scene. Callahan and a small band of renegades opted to sidestep the established distribution channels to bring in proper booze to build a modern bar. Although the government applies steep taxes to all distilled spirits, self-importation is allowed, if you’re willing to do the heavy lifting.

In its infancy, 28 Hong Kong Street would depend upon late-night cargo shipments, hauled into the bar—bottle by bottle, stored inside the bar’s furniture, when necessary. “With the creation of cocktails using world-class spirits at an honest price, the cocktail spark became a wildfire,” says Callahan. “The rest is history.”

It’s amazing to consider that this formative period was barely five years ago. The subsequent evolution occurred at a clip far more rapid than anything ever seen in craft cocktails, before or since. The phenomenon is a function of Singapore’s geographic and cultural strengths. The city itself is a melding of identities—Chinese, Malay, Indian, Western. All of this is reflected in the drinks assembled here.

“Diverse talent coupled with a Singaporean penchant for mastering whatever they put their passion into has led to local bartenders quickly embracing a cross section of skills that took decades of travel and dozens of bars for many of us Western bartenders to master,” says Callahan. “It’s a sum greater than its parts.”

“I have to say, it is unique,” says Symphony Loo, the beverage manager at Neon Pigeon. “There are so many different cultures in Singapore; most of the bartenders have their own styles, which they have adapted to the local scene.” To wit, Loo, a native Malaysian who was recently featured in The New York Times, works with local ingredients, reimagining the sensibilities of a Japanese izakaya into something distinctly Singaporean.

One of her top-selling creations, the Drop It, is an accessible blend of Ketel One vodka, coconut-infused sake and house-made yuzu limoncello. When she’s not busy behind the stick, Loo often emerges to stream sake from an oversize bottle down the throats of frenzied diners. “We have the mindset that our customers are like our own house guests,” says Loo. “Instead of treating them as strangers entering a restaurant or bar, we welcome them with open arms.”

If you think you have it pegged as simulacrum of all things Asia, Singapore works tirelessly to stymy such simplifications. So it is on the island of Sentosa, a beach-bound enclave off the country’s western shore. This is where you’ll find Capella, a premiere luxury resort and home to Bob’s Bar. Here, barman Vincent Zheng finds inspiration in the form of Cuban flavors. “Rum is a well-loved spirit in Singapore, and I believe it will continue to rise in popularity,” he says. “Cuba is a country known for its captivating beaches and beautiful colonial buildings. Our Island bar helps us create the famous tropical seafront experience holidaygoers flock to Cuba for.”

It’s not just lip service. Given the surroundings, a rum bar hardly seems like a thematic stretch. “Both cultures of Cuba and Singapore have a vibrant culture and heritage mix. Tourism is also a booming scene in both countries,” says Zheng.

But don’t confuse it for a tourist trap. The cocktail program here is heavily invested in its concept: Across the bar sits a full-size oak barrel, aging the resort’s very own rum, Navegante. The eight-year-old blend of pot- and coffey-still liquid was distilled by Foursquare in Barbados. It now continues its aging half a world away. Slightly earthy and picking up added vanilla with each passing day, it works wondrously into Zheng’s Tropical Thunder, a refreshing mashup of a Whiskey Sour and a Hotel Nacional. The restaurant is also licensed to sell its own brown spirit by the bottle. Today, it exists as one of several rum-centric bars scattered across the country.

Elsewhere on Sentosa is FOC, a beachfront bar excelling in high-minded Gin & Tonic variations—more than a dozen in total, served in outsize chalices with aromatic garnishes. Sleek and modern (with an infographic menu breaking down the ingredients of every drink), the outpost wouldn’t be at all out of place if it landed along Barcelona’s Mediterranean shore.

All this is to say that Singapore is comfortable drawing inspiration from all over the map—or from every zip code, as is the case at the stately Post Bar in the lobby of the Fullerton Hotel. Here, bartender Vik Ram catalogs drinks by the actual postal code in which they were conceived.

“It’s a cool concept, but it involves a lot of research,” he says. “Getting to know classics, getting to know places, history. It’s a story that we can talk with the guest.” Each of the recipes is bent to his whim. The Margarita (invented in Tijuana’s 22531 zip code), for example, is modified with dry curaçao and a tepache syrup, consisting of house-made caramelized pineapple beer. It’s understanding the classics and then flouting them—a playful approach and fitting metaphor for how Singapore’s cocktail culture has evolved its own identity.

In tracing the development of that scene, it would be impossible to understate the significance of Marina Bay Sands. The internationally recognizable hotel and casino, with its iconic rooftop pool riding a three-tower base like a surfboard, catapulted Singapore’s food and beverage to global superstardom. Attracting some of the biggest names from the West—chefs like Mario Batali, Wolfgang Puck and Gordon Ramsay—insured a cadre of Western drink makers would follow.

The two-dozen bars spanning the property are peppered with American-born mixos. Gibran Baydoun is one of them. The lifelong New Yorker left the Momofuku Group to helm the bar program at Adrift, an elegant environ set off from the hotel’s main lobby.

“Singapore has become flooded with incredible ideas combined with great technique,” he says. “There’s no shortage of talented bartenders and special bar concepts. And with that, guests have become more knowledgeable and discerning than ever. We are in an age of true competition, and we collectively get better because of it.”

“We are a small community compared to London or New York,” says barman Zachary de Git. “But this keeps our ties to each other tight. We are all family.” De Git came from Australia in late 2010 for a turn at Tippling Club, a 2017 Spirited Awards finalist for Best International Restaurant Bar. “I was originally meant to be here for three months. But I fell in love with Singapore. Like the country itself; it’s a melting pot of cultures. Bartending styles differ from bar to bar, but the underlying sense of hosting and hospitality is thick.”

Today, he helms Crackerjack alongside Peter Chua, a local legend of 28 Hong Kong fame. “I think the knowledge of drinks and creativity have grown tremendously,” says De Git. “Places like 28 Hong Kong Street brought classic craft cocktail traditions to the island.” Now they depend on a concentrated community of motivated professionals to take it further, to make these traditions their own. “There are many F&B outlets opening up,” he says. “All of them have great bartenders, managers and owners behind them looking to showcase their passion. You can learn 100 new things in one night out on the town.”

As its name suggests, the Lion City has come roaring out of the brush to assume its throne as king of the cocktail jungle. Today, it exists as a rich tapestry, the idealized synthesis of all that came before. If it continues at its breakneck pace, it won’t be long until it’s leading the charge.

Last year, Employees Only opened here, its first location outside of New York. Bringing on Michael Callahan as creative director seemed to suggest a full-circle story, of sorts. A man who helped imprint a sense of the West upon Singapore now gets to see it go the other way, sharing what he has learned with American expats lining up behind the stick.

“I’m excited not knowing what’s next,” says Callahan. “With the bar being raised so high, I am tickled to see where we will be in five years. I can tell you one thing, though: I am going to relish every sip of the journey.” 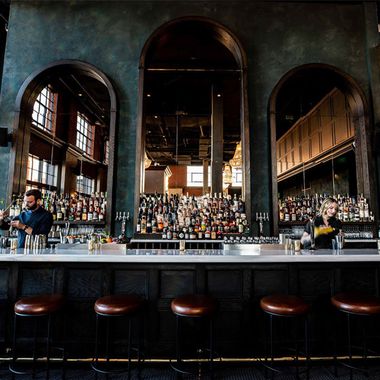