Four hours after I land in Singapore, I am, once again, on a cocktail crawl. It’s a recurring theme in my visits here.

In the near-equatorial city, it’s a warm and sticky evening—spritz weather. So my first stop is Caffe Fernet, a venue its proprietor calls an indoor-outdoor Italian Balthazar, which is right on. I sipped a Campari-manzanilla spritz on the harborfront, with a front-row view of the nightly light show at Marina Bay Sands, the most striking mega-hotel on the city’s already-distinctive skyline.

On my last visit, less than a year ago, Caffe Fernet had yet to open. Now it was hard to imagine the neighborhood without it. Such is the breakneck pace of bar openings in Singapore. Month after month, year after year, there’s something new to be excited about in the city’s drinking scene, only adding to the ever-growing roster of world-class bars.

Why Singapore? On some level, it’s straightforward—a thriving economy, an adventurous drinking public and a huge expat population. “There are plenty of people looking to drink,” says Steve Schneider, a partner in Employees Only Singapore, among other projects. “People work hard here, and the money’s good. When they get off, they’re ready to rock and roll.”

There’s also a seemingly endless appetite for new kinds of bars, and an audience ready to embrace them. “People are genuinely adventurous with what they drink,” says Jesse Vida, a more recent New York City transplant and the head bartender for the decadent gin-and-Champagne bar Atlas. “It gives you an opportunity to just go for it. If you do a good job here, people embrace it.”

And so there’s an opening for almost any kind of bar under the sun. “There’s no such thing as a Singaporean bar,” says Schneider. “It’s really intriguing for a bartender like myself; it’s like a blank canvas.”

Other cities have diverse cocktail cultures, my current and former homes of San Francisco and New York, respectively, among them. But Singapore is unique. It’s tiny. I couldn’t name you two great bars on the island more than a 15-minute cab ride from each other. It’s a close-knit community; bartenders you meet one night might be drinking one barstool over the next.

And it’s all so new. Even the city’s old-guard cocktail bars like 28 HongKong Street and Jigger & Pony only date to 2011 and 2012, respectively. There are no establishments coasting on their reputation or barely hanging on past their prime, which, as an eager cocktail lover, gives a night out in Singapore a sense that anything could happen. “Ask me about any style of bar, and I’ll tell you where to go,” says Schneider.

That means a night that starts with stunning high-concept cocktails from Michele Mariotti at the Mandarin Oriental hotel’s MO Bar could be followed by low-key waterfront spritzes, or the grandeur of Martinis at Atlas, or the mad-scientist vibe of Operation Dagger, or intricate Japanese-style cocktails at D.Bespoke. (With a mandatory break for chile crab somewhere in there—Singapore is, after all, one of the world’s best food cities). According to Schneider, “It’s possible to experience so many styles and drinking cultures in one town.”

One thing the city’s bar scene isn’t? Cheap. Alcohol taxes are considerable, and cocktail prices can be stratospheric. At high-end bars, expect to pay a minimum of $20 USD. But in a way, the steep prices encourage consumers to drink better. If a cheap whiskey is already expensive, you might pay a bit more for a better one. “The higher the entry price, the more likely consumers will favor the high-quality product,” says Indra Kantono, who with his wife, Gan Guoyi, is the proprietor of five Singapore establishments, among them the aforementioned Caffe Fernet and Jigger & Pony.

But that, too, is an enormous asset for the craft cocktail culture. “If you want to create the world’s best bar, with innovative bartenders and the finest spirits sourced from around the world, in an immaculate venue, the regulations are there to support you,” says Kantano.

And while regulations are stringent, they’re also transparent. “There’s no corruption,” says Schneider. “The government is straightforward with what they want and need.” Thus the government, while strict in its regulation of the industry, doesn’t stand in the way of professionals willing to jump through the hoops. “There’s a real opportunity here, and operators see it,” he says. “Why not throw your name in the hat and try?”

There’s no doubt that Employees Only has imported its own sense of fun to Singapore—one part cocktail rigor, one part joyful party vibe. Schneider and many others speak of the city as a clean slate where any bar can thrive. “You can develop your style, and then that style becomes integrated into what is now the Singapore bar scene itself,” he says.

The results are bars with real personalities. From the Amoy Street bar Native, with an obsessive focus on Asian ingredients, to the whimsical Tippling Club, whose high-concept menus have included a small bag of gummy bears, each replicating the flavor of one cocktail, there’s a sense of going all-in with a concept. And while Singapore has a reputation as being a bit buttoned-up, that’s nowhere to be seen when you’re jammed in with a bunch of bartenders on a party bus, pouring out shots of Jägermeister while crooning “Kiss from a Rose,” or when they’re at Skinny’s post-shift, drinking cheap American beer and clinking shots of fernet.

On every visit, I discover a new favorite bar. And on every visit, Junior the Pocket Bar, a semi-hidden drinking den run by the 28 HongKong group, has been reborn. Changing its entire concept every few months, Junior has been an agave bar, Norma; the New Orleans-inspired Magnolia; and now a Tiki bar, Pacifica.

On my last night in town, Junior, as Magnolia, was hosting bartenders from the highly acclaimed Charles H. at the Four Seasons in Seoul. (Between Singapore’s expat culture, ludicrously efficient airport and proximity to so many Asian cities, pop-ups and guest shifts are very common here.) On my last visit, Junior was under the guise of Norma, with the best agave selection I’ve seen outside Mexico. Now, it had been made over into Magnolia.

So there I was, sipping a flight of Manhattans, in Singapore, from an Italian bartender from a Seoul bar, in a New Orleans-inspired space that, in my mind, was indelibly associated with Mexican spirits. It was a singular experience, in a crazy mashup of cultures that could only happen in Singapore.

While Singapore’s craft cocktail scene is still in its infancy, there have always been bars in the city. Before the night was out, I found myself in a deserted shopping mall eating stellar izakaya with Japanese salarymen. For our purposes, the basement izakaya would do—a place to snack on tiny plates of cured egg yolk and pickled wasabi leaves, washed down with a bottle of crisp junmai daiginjo. The space was tiny and transportive; it could have been in Tokyo.

Singapore’s multiculturalism is indelible. And even once you’re beyond its world of craft cocktails, there are any number of drinking worlds to discover. 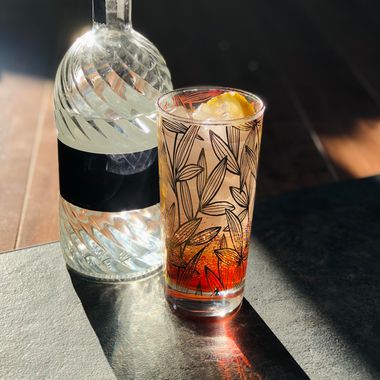