The temptation to label Navy Strength a Tiki bar is strong, if a bit off-course. While Seattle’s latest cocktail spot from Pac-Northwest power duo Anu and Chris Elford (No Anchor, Rob Roy) contains some of the trappings of classic Tiki—nautical décor, Polynesian carvings, drinks served in coconuts—there’s also another narrative at play.

“We wanted the bar to be a reflection of the places we’ve traveled and the flavors that have made an impression on us,” says Anu. “We love classic Tiki, but there’s often a connotation that it’s a party culture where the drinks are cheap and strong and it doesn’t matter what’s in them. One of the things I’ve enjoyed most is watching people come in and have a good time but also invest themselves in the spirits and ingredients we’re using.”

To help guests navigate the sea of good booze on its backbar, Navy Strength breaks its cocktail menu into three parts: Tiki, Tropical and Travel, the latter of which is inspired by the flavors of a different country and alternates every few months depending on the whims (and frequent flyer miles) of the couple. “It could also be a place we haven’t actually visited but want to go to badly,” says Anu. “The idea is to have fun with it.”

“My family is from India, where my father owns a large kokum farm,” says Anu. “Kokum (sometimes called a jungle plum) is a type of mangosteen that has lots of ripe raisin flavors and a nice stripe of umami. I grew up eating it all the time. When we opened the bar, my father sent me some, and we started experimenting with it. We eventually came up with a cashew orgeat and added a bunch of rum, spices and citrus, and the flavor profile was just incredible. I love this cocktail so much.”

“There’s a snack-y quality to the drink, like a trail mix, that’s oddly satisfying,” says Chris. “It’s also the true apex of what our travel menu can be. It takes the flavors of a place you may not know and ties them up with elements of modern cocktails that are a little bit creative but not too cute. It was kind of buried in our menu, but people just find it. It’s one of our most popular drinks against everything I’ve learned about menu psychology and placement.”

“We decided early on that if we were going to do classic Tiki drinks, we had to do them right, and this is one I’d say we got right,” says Anu. “Our menu description calls it the most bastardized drink since the Martini, and that’s 100 percent accurate,” says Chris. “Every Tiki bar should be able to nail a Mai Tai, but so many don’t. A lot of places serve a marzipan-heavy Mai Tai that’s missing the balance that makes this drink special. We don’t put much orange flower water in our orgeat, which can make your cocktail taste like the inside of a grandma’s purse. We do, however, add a bit of salt, and I think overall that helps make the flavors pop.”

“One of my missions over the last 10 years has been to redeem Jågermeister as a cocktail ingredient,” says Chris. “It’s been slow-going to say the least. Everyone who orders it raises an eyebrow at the mention of Jåger and then comments later about how much they loved it. Falernum is the ingredient that ties it all together. The lime peel, clove and almond syrup is like Tiki kryptonite and is often the answer to ‘what is this cocktail missing?’ I think this cocktail is fun and a little silly and has a fantastic depth of flavor. Plus, we end up with a surplus of coconut water, which we use in other drinks on the menu, including the Phoenix Down, a nonalcoholic version of a Zombie that we serve in our juice bar, the Navy Strength Coffee & Juice.” 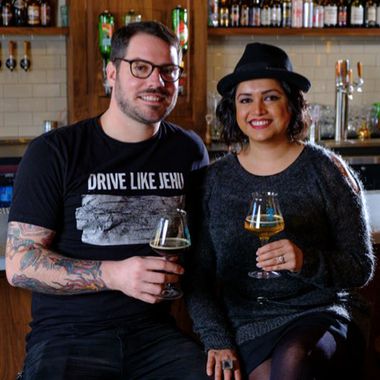