So you’re a tequila drinker—a sipper, a snob, a stasher of rare earthen bottles. You spend 20 minutes poring over the spirit list at a divey Mexican restaurant while your friends mindlessly plow through pitchers of Margaritas. You use words like mouthfeel and terroir unselfconsciously. You know your stuff.

Now all of a sudden here comes mezcal, a new (to you) agave spirit that’s bolder, wilder, more unpredictable, with a wide range of varieties that are downright mystifying. Quite frankly, you’re intimidated. That’s OK, we’re here to help. We tapped Chris Reyes of NYC’s agave-obsessed Temerario to walk through you some basic rules.

“The first thing I’d recommend is don’t go for the most expensive mezcal,” says Reyes. “You don’t want to get the expensive stuff and not know what you’re drinking.” Instead, he steers newbies toward espadín, the most common type of mezcal, which can show a wide range of flavors, from earthy and fruity to intensely vegetal.

“It’s a stepping stone,” he says. “It’s a good start for getting to know and enjoy mezcal.” Brands he recommends include Del Maguey and El Jolgorio. Espadín is also ideal for mixing into cocktails like a Mezcal Old Fashioned, he says.

“The No. 1 denominator that most people associate with mezcal is smoke,” says Reyes. That’s understandable, he explains, since mezcal is made by roasting the agave in an underground pit. But that smokiness can range from faint to in-your-face, and it’s just one from a staggeringly wide range of characteristics you’ll find in mezcal. “You can choose something stronger or milder that will go down easier, or something funkier,” he says. “There’s really a mezcal for every palate.”

“The first mistake many people make is pouring mezcal in a shot glass and pouring it down their throat,” says Reyes. Instead, he recommends sipping from a shallow clay cup called a jicara. “It’s open so you can smell what you’re drinking. You smell, you taste, you take it from there.”

The what salt? “Maguey is an agave,” says Reyes. “The worms, gusanos del maguey, come out of the plant. In Mexico, they pulverize them and add them to salt. That’s worm salt.” He recommends a two-ounce pour of mezcal (in a jicara), accompanied by a half-wheel of orange sprinkled with worm salt. “You sip your mezcal, then take a bite of your orange, so you keep cleaning your palate and keep tasting the mezcal.”

But Not the Worm in the Bottle

But if you spot a worm in the mezcal bottle, take a pass. “People say if you eat the worm in the bottle you’ll hallucinate,” says Reyes. “That’s a crock. The brands pushing mezcal to new levels don’t use the worm. If you see a worm in your bottle, it’s probably not good mezcal.” 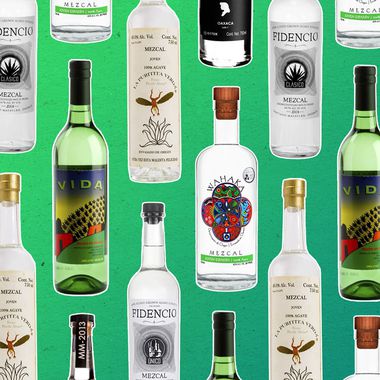 The Best Mezcals for $40 or Less