The Weird, Drunken History of SantaCon. And How Bartenders Deal with It. Or Don’t.

Every year, as the holidays roll around, so too do the hordes of drunken Santas in major cities across the globe. The annual pub crawl known as SantaCon is quite possibly the most polarizing Christmas tradition of them all, beloved by college bros and abhorred by pretty much everyone else, especially those who are forced to deal with it from behind the bar with no escape. How did it all begin?

The first SantaCon was in 1994 in San Francisco, a product of The Cacophony Society, known for creating offbeat experiences in the city like Bay to Breakers and Folsom Street Fair. “It was a response to Christmas consumerism by way of mockery,” says writer and fourth-generation San Franciscan Ali Wunderman.

The concept spread across the country and then the world. But the spirit of the event has changed over time. “SantaCon quickly became perverted by the frat house elite, who wanted to replicate the parts of it they liked, namely dressing up and drinking,” says Wunderman. Today, the event shows little of the earnest anticapitalism of its roots and is instead a drunken Christmas celebration.

In some cities, locals know to stay away from the path of debauchery, often paved with vomit. Serious cocktail bars remain wary, though there are pros that counter the obvious cons that come with welcoming SantaCon participants into your establishment.

For Melissa Zornes, a bartender in Chicago, it depends on a myriad of factors. “If you’re on a main strip that sees a high volume of walk-ins and large parties, the decision-making lines get a little blurry,” she says. “That said, if this is a ticketed crawl, the organizers should have called all establishments in their path to notify them for staffing and security.” If that had happened, then it comes down to personal preference. There’s no shame in participating in a potentially lucrative event, but plan accordingly.

“If your bar is participating and is expecting to be busy, you should have extra security, pay attention to occupancy and set up a special menu featuring lower-ABV drinks,” says New York City bartender Maggie Eckl. “Also, don’t be afraid to use plastic drinkware [or] refuse shots. My biggest concern about an event whose central focus is drinking is overconsumption, especially since a lot of the participants aren’t thinking about food and can get caught up in the day and lose count of how much they’ve been drinking.” Either way, Eckl recommends making your participation policy clear at the door for the sake of Santas and civilians alike.

Still, when it comes to participating in SantaCon, many bartenders give it a hard no. But Ben Wald, a bartender in New York City, points to one possible repercussion of refusing entry outright. He says the types of people who take part in the event tend to have large groups of friends who might return to the bar on their own. “It can be a good way to advertise while making money,” he says.

“The whole thing is designed around being fun and rowdy,” says beverage consultant Greg Wasserman. He encourages exercising a little compassion in such a scenario. “It’s a bar crawl, after all. But who’s to say that every Santa is a bad person? In my opinion, they shouldn’t be turned away until they’ve done something wrong.”

In the event that a SantaCon group does act up in your bar, Wald recommends enforcing a strict no-tolerance policy. “If one person in the group messes up, your whole group gets bounced. It leads to self-policing and generally better behavior. Also, it lets the staff know that you have their backs. It’s a big day, and you can make a lot of money from it, so why not just put systems in place to make sure everyone has a good time and that it’s beneficial to your business?” 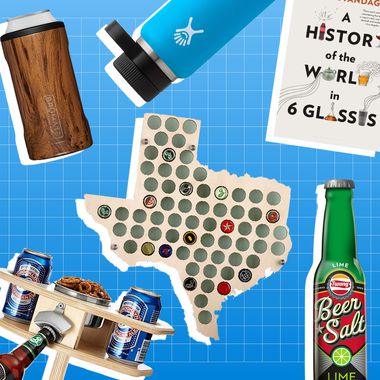 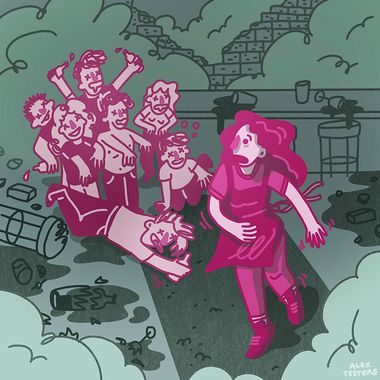 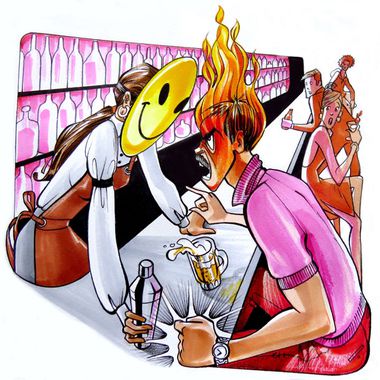 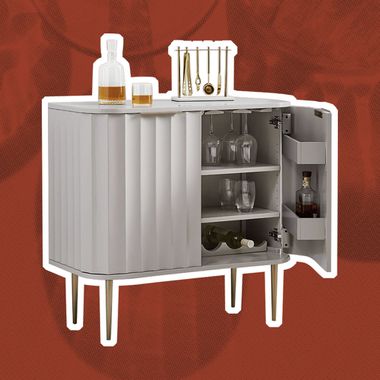