Everything You Need to Know About Hogo Rum

All aboard the funk train.

A rum with hogo is like that old Supreme Court obscenity litmus test: You’ll know it when you see it (or in this case, taste it).

The word hogo derives from the French term “haut gout,” which refers to slightly tainted game meat and any other strong yet desirable flavor. Today, its derivative is widely used to characterize the earthy, rancidly nutty or funky flavor in some rums. But what exactly causes it? Why are some rums filled with this distinctive hard-to-describe-but-impossible-to-miss character while others have nary a whiff? And perhaps more importantly, do you really want to be drinking something that comes across in the glass so unapologetically funky? The answer is yes, you do.

“The fun and mystery of hogo is that it’s hard to define,” says Jim Romdall, the western brand manager for Novo Fogo cachaça. “If I could somehow say ‘rotten fruit’ and find the words to spin it into something positive and interesting, that would be it.”

Romdall was part of the panel of “Feeling the Funk: From Dunder to Wonder,” a seminar at the 2017 Tales of the Cocktail event in New Orleans that examined the chemical analysis of rums with hogo and explored how that character can be fantastic in drinks.

Attendees were asked to participate in a sensory evaluation, rating the hogo levels in unknown rum samples. The results from the focus group will be used to determine the chemical analysis for hogo, says Joy Spence, the master blender of Appleton Estate Jamaican rum who also participated in the panel. Her personal definition of hogo is “one of powerful ester notes intertwined with funky nutty and fatty acid flavors.”

So maybe the experts can’t even agree exactly what hogo smells or tastes like. But how about where it comes from? Well, there are a few theories on that, too.

Romdall points to the source material. “In my experience, the more raw the material that can attach itself to the distillate, the more potential for hogo,” he says. So spirits like cachaça or rhum agricole, which are distilled with freshly pressed sugar cane juice instead of a byproduct like molasses, will inherently contain some esters that add hogo.

Tom Brown thinks it goes beyond that, though. The former bartender and owner of Hogo, a now-shuttered rum bar in Washington, D.C., believes hogo is majorly influenced by sense of place.

“It’s terroir-driven,” he says. “The place where the rum is made stamps its mark in a multitude of ways.” The environment, growing techniques, harvesting, processing, molasses production, type of still (pot stills tend to bring in the funk more so than column stills) and even the type of water used all play a part, he says.

Fiji rums are heavily dominated by mace, while Jamaican rums have toffee aromas and flavors, he says. “Both have hogo but from very different places.”

And the proof at which the liquid is taken off the still also comes into play, says Jake Parrott, the national sales manager for Haus Alpenz, which imports Smith & Cross Jamaican rum.

“The lower the proof, the more room in the resultant liquid for flavor,” he says. So molasses, yeast and dunder (the liquid left in the boiler after distilling a batch of rum) are going to produce a flavorful, hogo-rich rum like Smith & Cross, especially when distilled to 85%. “In true pot-still Jamaican rum, flavor intensity takes many forms, including roasted banana and other fruity esters but also tobacco, heavily tanned leather and earth.”

So which cocktail ingredients work well with hogo rums? Spence says they mix very well with citrus flavors but tend to clash with very spicy ones. Romdall says hogo rums’ bold flavors and fruit notes match up with tropical fruits, bitters and amari.

“Hogo flavors are extremely expressive, often to the point of saturating the parts of the palate they touch,” says Parrott. “Dilution, whether with one’s own saliva while sipping neat or in a cocktails, can really open them up.”

Unaged or shortly aged ones do well in sours, other shaken drinks or tart punches. But older, fuller-flavored rums don’t take very well to a strong chill, as the wood tannins from oak aging “clamp down on the front of the palate,” says Parrott. He stirs them with a gentle red vermouth like Dolin Rouge or in a stirred and strained Rum Old Fashioned. But some can also be great in a Trader Vic-style Mai Tai, as the orgeat can counter those tannins.

And just like with tannins in wine or spirits or peat in scotch, everyone has a different tolerance and perception level for hogo. “It’s a foreign flavor to most that’s incredibly strong,” says Romdall. Parrott agrees, adding that the polarizing quality of hogo is exacerbated by big-brand attempts to position the rum category as a sweetened, caramelized vodka.

But in the end, despite the science of flavor maps and chemical analysis, Brown thinks hogo defies these norms and would like to see it remain somewhat mystical.

“Hogo is the aroma of the place where rum is made, but it’s more,” he says. “It’s like a picture postcard of that place, imprinted on liquid and delivered to you.” 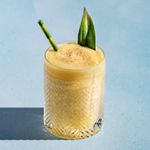