And he’s not alone. In the last few years, thanks to America’s growing interest in health, and a recent uptick in consumption of macerated bitter liquors, bartenders across the country have begun to consider detoxing their customers by spiking drinks with not just booze but health shop favorites, including immunity-boosting mushrooms, adaptogenic herbs and superfood algaes.

“I was inspired to include medicinal ingredients from my time working with Italian amari,” says Fischer, explaining that to make his amomi fructus tincture, built from the namesake digestion-improving, inflammation-combatting plant, he follows a similar process to producing amaro. He steeps amomi fructus, along with a number of other herbs, in alcohol, in this case grappa, for three days. He then adds the tincture to a cocktail of the same name, along with mezcal, moonshine, agave, lime and egg whites.

Over at NYC stalwart Saxon + Parole, last spring bar director Maxime Belfand added the red-white-and-green-striped Queen Park Swizzle ($16), made from a blend of Banks 5 Island Blend rum, Rockey’s Milk Punch, minty Ancho Reyes Verde chile poblano liqueur, lime, Creole bitters and spirulina powder. This protein-packed algae, lauded for its abundance of vitamins, minerals and antioxidants, made sense in the drink, says Belfand, who explains he has been trying to incorporate “ingredients with the maximum nutrition and health benefits for guests.”

Belfand sees the ongoing trend of bartenders adding health-supporting ingredients to cocktails as people becoming “more careful [of] what they’re putting in their bodies.” Next up, he plans to experiment with hormone-balancing maca root and anti-inflammatory CBD.

Meanwhile, at new NYC drinking den Black Emperor, bartender Ben Rojo debuted his own elixir, the Into the Woods, just last month, built from Don Papa 10-year-old rum, walnut-infused bourbon, aromatic bitters, sea salt and a medicinal mushroom-infused maple syrup. Rojo explains that the fungi he adds to his syrup blend, which include reishi and chaga, fall into a category known as adaptogens, a class of ingredients that help the body cope with outside stress without compromising the immune system. In particular, he says reishi and chaga both raise his energy levels during the day. And like Belfand, he too believes that the growing trend of health-supporting botanicals now hitting cocktails is a result of people “becoming more mindful of what [they] put into [their] bodies.”

A World of Restorative Benefits and Flavors

And while New York may be America’s leader in detox-retox-style imbibing, other cities like Chicago and Los Angeles are joining in. Over in the Windy City, hip vegetable-forward eatery Bad Hunter unleashed The Healing Component ($14) this past November. Bar manager Vinny Starble aimed to capture the feeling of comfort one experiences when consuming warm soup, so he spiked his hot brandy, sherry and jalapeño number with clarified bone broth, with bone broth serving as a health trend in and of itself, prized for its abundance of nutrients and ability to support joint health.

“After a night of drinking, it’s nice to have something to restore nutrients and boost the immune system,” says Edwards. He explains that while schisandra berry helps to detoxify the liver and electrolyte powder replenishes lost minerals, turmeric counters internal inflammation.

Just west of Chicago, over in Oak Brook, Jon Augustin, the beverage director of seasonal plant-forward chainlet True Food Kitchen, released an updated take on the Margarita this past fall, spiked with vitamin-C-rich sea buckthorn juice. His Ginger Margarita calls for organic reposado tequila, ginger liqueur, honey and sea buckthorn—an orange Tic Tac-shaped berry native to Europe and Asia, beloved for its abundance of vitamins and antioxidants. Augustin adds that the berry “is very beneficial for liver function” and that “with its high amount of vitamin E and carotenoids providing a safeguard for the liver, it can help counterbalance any effects the spirit is doing to the liver.”

For a city as health-conscious as Los Angeles, it’s surprising that bars are only now starting to embrace longevity-supporting intoxicants. Bar director Tobin Shea and bartender Anthony Castro of Downtown Los Angeles’ staple New American haunt Redbird added a kombu cocktail to their beverage list last month. The Old Man and the Sea blends Fords Officers’ Reserve gin, Clairin Le Rocher rhum agricole, dashi (Japanese stock made from kombu [seaweed]), vermouth, absinthe and celery bitters. Shea cites the seaweed’s ability to support your endocrine and nervous system. He says, “I think as bartenders are looking to make their own vermouths and amari, their eyes are opened to a whole new world of roots and herbs that not only have flavor but serve medicinal purposes, too.” 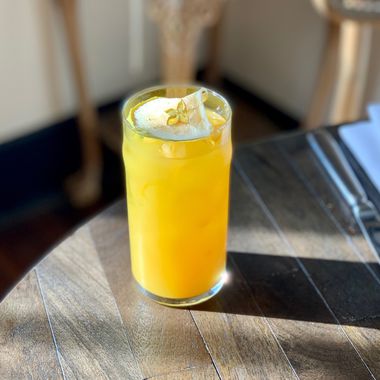