The quest for rapid-aged spirits is nothing new. Spirits typically barrel-aged for a decade or more are hardly cost effective for new distillers looking to grow their business quickly. Many have turned to unorthodox aging methods to speed up the process, from using undersized barrels to ultrasonic sound waves.

For some savvy distillers, inspiration lurks not in the barrel, but in the environment itself. From a Colorado mountain peak to the darkest depths of the Caribbean Sea, aging in extreme environments demonstrates the pioneering nature of today’s distillers. Even gravity can’t contain their imagination: Space-matured Scotch looms on the horizon.

And the trusty barrel? That too may become a thing of the past: Science can mimic its effects in a fraction of the time. Curious about the future of aged spirits? Pack your sense of adventure and explore these five spirits.

What happens to rum when it’s aged at 8,900 feet? Karen Hoskin, the president and co-owner of Montanya Distillers, located in the mountain town of Crested Butte, Colorado, has mastered the art of high-altitude rum. The ingredients here matter—pure mountain spring water, Louisiana sugarcane and local honey—but the extreme elevation gives Montanya rum its character.

“Temperatures in the mountainous climates fluctuate daily and allow the flavors in the barrel to meld differently than they do at sea level,” says Hoskin. Temperatures at Crested Butte fluctuate as much as 20 to 40 degrees in a day, falling dramatically at night.

As temperatures drop in the barrel room, the pores of each American oak barrel contract and expel alcohol. When the temperature rises, they expand to draw in new rum. These frequent shifts allow more rum to come into contact with the oak during maturation. No need to introduce agitation or sonics—the altitude does the work.

Jefferson’s Bourbon founder Trey Zoeller launched an exploration into uncharted waters—specifically, what bourbon might taste like if it was aged on the ocean.

As a native Kentuckian, he knew that distillers in the 1700s used the Ohio and Mississippi Rivers to transport their spirits for trading. This time on the water, with its constant motion and temperature fluctuations, likely accelerated the aging process. To test the theory, Zoeller teamed up with OCEARCH, a nonprofit that promotes ocean research, to sail new-filled bourbon barrels some 10,000 miles over three and a half years.

The result? A four-year-old bourbon with a hue darker than a 30-year-old bottle. Zoeller says the process allows the spirit “to soak up the elements of the sea. The result displays characteristics never seen before in bourbons of this age.” It also imparts strong caramel flavors, like dark rum, and a distinct briny quality.

This rum from Cayman Spirits Company matures at a depth of 42 feet beneath the surface of the Caribbean—also known as seven fathoms. A blend of one- to three-year-old rums, Seven Fathoms was inspired by tales of transoceanic voyages of wine and the effects that motion had on maturation.

But instead of aging on the water, Seven Fathoms is aged underwater, at a top-secret location. Walker Romanica, the brand’s co-founder, believes it’s an ideal setting: The ocean’s distinct levels of pressure and humidity are unmatchable on land, and the constant motion of the tides forces the rum in and out of the wood, contributing to its complexity. The solera-blended final spirit is smooth and dry with undercurrents of citrus, oak and vanilla.

Few can claim that they’ve experienced the joys of space travel. In reality, it’s more likely that your Scotch will get there before you do. The days of space-bound spirits are, indeed, upon us and Ardbeg is the first whisky brand that’s made it into orbit. The galactic goal? To determine the impact gravity has on maturation.

Ardbeg’s interstellar experiment began in 2011 when a vial of Ardbeg-crafted molecules was launched into the cosmos. In partnership with U.S. space research company NanoRacks, the vial orbited earth for three years, circling the planet at 17,227 miles per hour, 15 times a day aboard the International Space Station.

In September 2014, the vial safely returned to Earth and was rushed to a lab for analysis. No one knows the results of the experiment yet, as the exhaustive study is still underway at the Ardbeg distillery in Scotland. For now, ponder the possibilities of astronautical aging with a glass of Ardbeg Supernova, the limited-edition malt released to commemorate the Ardbeg vial’s voyage.

At Lost Spirits Distillery in Monterey, California, Bryan Davis has dedicated years to mapping the chemistry of barrel-aged spirits. In 2015, he announced his greatest breakthrough to date: the Model 1, a patented, portable chemical reactor that produces the equivalent of 20 years of barrel aging in just six days.

“When charged with oak blocks and freshly-distilled spirits, the reactor uses energy in various forms to trigger the chemical reactions that take place in a barrel as spirits age,” Davis wrote in a white paper. The reactor uses gas chromatography and mass spectroscopy to clone the chemical compounds that give an aged spirit its essence. It allows for endless experimentation with nearly immediate results, and can even help resurrect long-lost spirits by cloning their chemical signatures. Davis has used the technology to make whisky and rum, too.

With the maturation period reduced to a matter of days, Davis believes the industry could experience increased quality alongside plummeting prices. We’ll see. 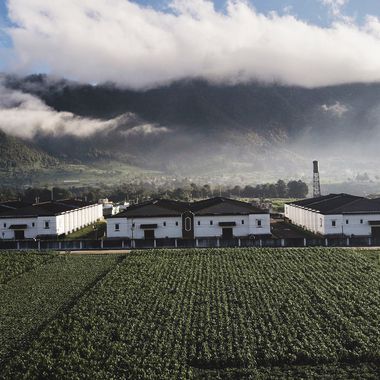