Do Dehydrated Citrus Wheels Add Anything to Drinks?

The dehydrated citrus wheel is up there with the metal straw—a conspicuous symbol of the sustainable cocktail movement, an incarnation of a mindfulness and responsibility to preserve and use every last bit of an ingredient rather than cut, squeeze and discard. If the drinks world is migrating toward the culinary philosophy of nose-to-tail, the dehydrated citrus wheel is the cured charcuterie, the beef jerky.

But their precise placement via tweezers on the rim of more and more cocktails raises a few questions. Does it make the garnish more about form than function? Do some drinks need the citrus oil or juice that only fresh fruit can provide? And do truly balanced cocktails even require anything on top?

Let’s start with what dehydrated citrus can and can’t contribute to the smell and taste of a drink. While these dried-out fruit slices might look like they were pilfered from a bag of potpourri, they inherently lack its headiness. However, they actually compensate for it another way, believes Jimmy Barrett, the bar development manager of Zuma in Las Vegas. “Fresh might have more aroma, but actually dehydrated has more of an intense flavor, which adds to the experience.”

Benjamin Rouse, the bar lead at Henley in Nashville, agrees. He believes dehydrated citrus is not only aesthetically pleasing but provides more control. “When you use a fresh garnish in a cocktail, the juice from the fruit slowly dilutes the flavor as it was initially made,” he says. Rouse uses dried citrus to top drinks like the Attention to Detail (Death’s Door gin, douglas fir, Galliano liqueur, falernum, lime, mint, cedar and salt) and the Traveler’s Tonic, a no-proof sip with cucumber, rosemary, thyme, lemon, juniper and soda. “You can candy them before dehydration, which makes the outside skin a little opaquer and adds a bit more flavor.”

And if it’s the imperceptible scent that’s bugging you, there are a few hacks to either deflect or offset it. Jamie Clark, the lead bartender at Pikoh in Los Angeles, uses dried citrus in cocktails that are already very aromatic like the It Was Obeah, which blends Jamaican rums with lime and house-made sorrel syrup with hibiscus, allspice, ginger, cinnamon and cloves. The drink is finished with a dried lime slice. “It’s not only beautiful, it signals citrus to our brain without adding unnecessary aroma if there’s already lime juice in the drink,” says Clark. The Pikoh team also turns to a sprinkle of different sugars, spices or salts before the fruit goes into the dehydrator. And you can always employ a few spritzes of citrus oil from an atomizer to boost the nose, advises Clark.

Some bartenders object to dried citrus garnishes for more aesthetic reasons. “I’m not a huge fan,” says Logan Demmy, the bar manager for Veritas in Columbus, Ohio. “The oxidized color of limes is a turn-off.” He currently uses them only in the Lovely Weather For ..., made with pisco, mulled wine, water and simple syrup kept in a sous vide bath. The drink is ladled out and served with a dried lemon wheel, which when steeped in the hot liquid releases its fragrance and taste in the same way a tea bag would.

In a smaller market like Columbus, anything decorative goes a long way to prove the value of a $14 drink, says Demmy. But all adornments should be practical and make the cocktail smell and taste better. He first came across dehydrated citrus years ago in New Zealand, where most bars turned to frozen juice in the off-season when a fresh lime could cost around $1 USD. “It would go a long way in reminding the customer where the juice for their Daiquiri really came from,” says Demmy.

But beyond beautifying a beverage, delivering scent and taste in new ways and letting bars preserve ingredients when they are readily available and cost-effective are the environmental implications associated with using dehydrated drink toppers. Are they really making a difference?

Suffice it to say that Negroni purists might never be able to abandon the layer of citrus oil from an expressed fresh orange peel, while Paloma fans might be perfectly OK with a dried grapefruit wheel in their Collins glass. And the dimension extracted from bitters, tinctures, shrubs and their ilk may eliminate the demand altogether for anything else atop some drinks. But those filled glass jars on bars seem to be here to stay. 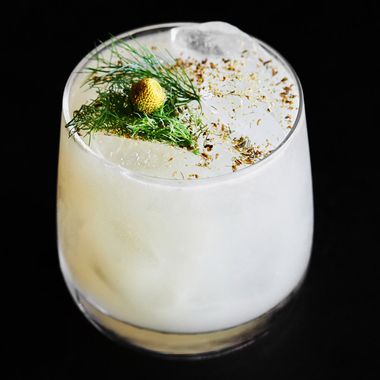 This Unusual Cocktail Ingredient Will Set Your Mouth Tingling