Five years ago, when non-malt-beverage based canned cocktails had only recently hit the market, there were barely a handful to pop and try. Why? Outmoded Prohibition-era laws that made them expensive to produce (anything other than beer or malt beverages in a can are stuck in a different, higher tax category), thus making the gamble on producing them an expensive proposition.

The laws still exist, although states like New Jersey are currently contemplating changing them. But even with a higher cost to make them, the gamble on canned cocktails has paid off. Today, pop-top cocktails are no longer a novelty on store shelves. Because of their ease and portability, they’ve become a popular way to enjoy a decent mixed drink anywhere you like: pools, picnics, parks, and more.

We still love canned-cocktail OGs such as Long Drink and Hochstadter’s Slow & Low Rock & Rye. But it’s time to taste some of the newest offerings. These 13 are our favorites at the moment.

Although it was bought by Anheuser-Busch in 2014, this brewery still operates out of Patchogue, New York, as it has since 1998. This year, it’s offering a trio of vodka-based offerings in 12-ounce cans that clock in at 9.1% ABV. The standout is the snappy Grapefruit Zinger. In the glass, it looks like fresh grapefruit juice with a little bit of bubbly zip, and it's rife with flavors of fresh pink grapefruit and ginger, with a lip-smacking, pithy finish. Think a Greyhound with more personality.

Boardroom Spirits dipped a toe into the canned-cocktail realm last summer, and it was successful enough that it added a Moscow Mule and Vodka Iced Tea to its line of 355-mL cans. The simple and not-overly sweet flavors are clearly geared toward adult palates. We really dig the super-steeped, nicely bitter finish on the 5.5% ABV Vodka Iced Tea that makes you want to reach for more.

This collaboration between Black Button Distilling and a group of professional beekeepers is behind this gin-based drink with a mind toward helping the ongoing bee crisis. A portion of the sales of every can of CanBee goes to the Xerces Society’s Pollinator Conservation Program, which works with bee conservancies the world over. At 8% ABV, this lightly carbonated blend of gin, lemon, and honey pours out golden in color, with the sweet, soft smell of honey hitting your nose straight away. It’s herby and lemony, with a sweet-tart, lip-smacking flavor that finishes clean and crisp.

A separate division of Austin’s Cantina, this light canned cocktail is a good choice for the calorie- and sugar-conscious. Clocking in at just under 100 calories, the fizzy 5% ABV highball fills your nose with fresh cucumber aromatics, which continues on the palate and transitions to a minty finish in this clean, refreshing drink.

Austin, Texas-based Cantina Spirits recently released a fizzy Margarita in 12-ounce cans with a subtle and refreshing summery watermelon-and-citrus flavor. At 5.6% ABV, this blanco blue Weber agave-based drink is a low-fi option for cracking more than one on a long, sunny afternoon by the pool.

One of the latest releases in this prolific lineup of canned cocktails is the Peach Margarita. The 10% ABV means tequila is the first thing you smell, with subtle juicy peach notes melding nicely with the tequila on the palate. Of note, there’s a new strawberry version, too.

Bartenders are agreeing it’s time to resurrect the Espresso Martini from the shadows of bar culture, and this company is taking it a step further. The 6.8-ounce cans are uncarbonated, and you need to give them a little shake before popping and pouring the 11% ABV vodka-based drink. Coffee lovers are in for a really happy surprise: Instead of being a sugar-bomb, there’s a gentle, subtle note of cocoa melding with the beans, and while the finish is a little on the short side, those nice, dark cocoa notes linger.

An early participant in the canned-cocktail trend, this company’s original offering was a canned version of the vodka-whiskey concoction made behind the bar at the Pequot Inn on Fishers Island. Among its new offerings is this 7% ABV Arnold Palmer-inspired spiked tea. It features the whiskey-vodka-citrus base of the original, with the addition of brewed tea. It’s lemony, lip-smacking, and dangerously easy-drinking.

It is no surprise that a bourbon icon like Beam would want to get in on the canned-cocktail boom, and well it should. These classic 5% ABV bourbon-and-seltzer highballs have a subtle citrusy orange-lemon kick. If the less-than-exciting packaging doesn’t entice you, reconsider: It’s a quality cocktail in a can from one of the great American bourbon makers.

Los Angeles bartender Aaron Polsky’s LiveWire line of canned cocktails features creations from top bartenders. The latest release is a summertime must from Chicago tiki maven Erin Hayes. Her Rocket Queen is a riff on the Donn Beach-inspired Jet Pilot and is LiveWire’s first rum-based drink in the line. Snappy cinnamon and the vanilla-grassy notes of pandan make an excellent complement to the drink’s base spirit, Guatemala’s Casa Magdalena rum; juicy, mouth-filling notes of fresh pomelo round out the fun.

If you have suspicions about a clothing maker getting into the booze biz, who could blame you? But the newly launched booze-making wing of the relaxation magnate’s empire, Coral Cay Distilling in Yakima, Washington, makes this 5% ABV vodka-based beachy treat. It pours clear and carbonated, featuring tropical, floral aromatics along with subtle smells of citrus and peach. It’s bright, juicy, and fresh in your mouth and pleasantly citrusy on the finish.

Most of the ingredients in this line of cocktails are via from-scratch components. The producers make the bitters, the vermouth, and amaro, and source the fruits, herbs, and the like, from California’s abundant farms. The resulting flavors are complex, with elements of brightness, bitterness, and fruit. The sparkling Sundowner features the sweet-tart tang of strawberries, rhubarb and oak chip-infused bitters, Champagne vinegar, grains of paradise, and vanilla. 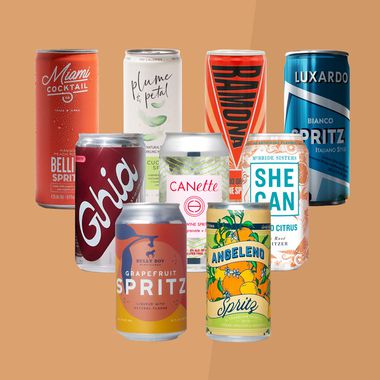 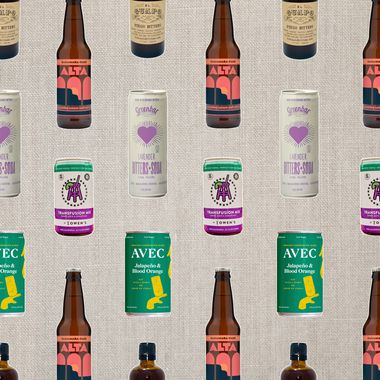