This Is the Right Way to Do Music in a Bar

The magic behind creating the perfect musical environment for a bar is one part art and one part science, with a solid set of tracks elevating a bar from ho-hum to extraordinary (and an ill-timed, accidental Nickelback song sinking the mood quickly).

In Louisville, bar owner Larry Rice is a master of the finely-tuned auditory experience, and he’s developed two bars—The Silver Dollar and El Camino—that have music at the forefront.

Rice breaks down how a well-curated bar soundtrack can make all the difference in guest experience, and why sound should never, ever, be an afterthought.

What’s the vision for the soundtrack at your bars?

The Silver Dollar’s whole concept is built around the Bakersfield Sound, so we play those artists primarily [e.g., Buck Owens]. We do play some people who aren’t necessarily Bakersfield, but they have to be heavily influenced by it, like Dwight Yoakam. At El Camino, we do the same thing, but with surf music. It’s a bit more liberal because Dick Dale influenced so many guitarists that you can play The Ramones and get away with it.

We’re playing the music for that moment. When you’re talking about going out to a bar, most people know how to make a drink at home, so you’re not just at a place for that. It’s the whole experience. The guests aren’t always 100-percent sure why they love a place, but I think it’s all those little things—like the music—that make [a bar] really special. It’s creating an environment versus just having a room for people to drink.

What’s the process for selecting the music you play?

We curate Silver Dollar and El Camino in similar ways. Everything we play is on vinyl. I feel like that’s so much better than a Pandora playlist.

Making a [Pandora-style] playlist is something I used to do. I would spend something like 70 hours on a playlist that was a month-and-a-half long, with services taken into consideration and no repeats. My thought process was that people only notice the music if they love it or hate it, so I would build the soundtrack so that it was never the same style of music. It might’ve been The Clash one minute, then Edith Piaf the next. If you hated one genre of music, in 3 minutes you’re going to be hearing something else.

It was also a good way to keep the staff from getting bored, too, because they didn’t have to hear the same songs over and over. Eventually, though, I just felt like it wasn’t thoughtful enough for the guest. For example, I couldn’t know if it was going to be raining on a Wednesday and if people needed a little jolt of energy. Sometimes, too, you can just tell what guests want to hear.

What other bars are successfully using music to help define their space?

I think Delilah’s in Chicago is a great example. It’s a whiskey bar, but it’s also a punk rock bar. They want the feeling that you’re in a neighborhood bar playing old school punk music, but you can still pick great whiskeys out. They really considered the soundtrack for the atmosphere they have created. When you’re designing a place, you have to really consider music as part of its fiber, no matter what kind of bar it is. 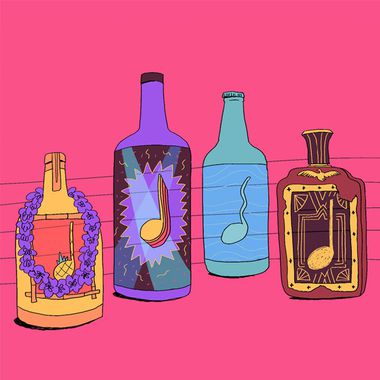