If you walked past the patio of a certain section of Mulberry Street in Little Italy from one summer to another, you’d see an Italian piazza, then a slice of Cuba and now what appears to be a beach bar.

Those who know, know this is the home of the Mulberry Project. That’s why, according to partner Jasper Soffer, he and his cohorts named the endeavor what they did. The Mulberry Project is meant to conjure an art project, a fluid work-in-progress. And right now that moment involves a metropolitan take on that buzzy vacation destination Tulum, on Mexico’s Caribbean edge.

Now You See It, Now You Don’t

The themes for the patio’s incarnations have been generated somewhat randomly. During the bar’s first summer, four years ago, the theme was Brooklyn. The next theme was The Highline, that dramatic, raised overpass and former railway line that has come to define much of the New York’s lower West Side. Then the run-up to today: Italian/Mediterranean; Cuban/island; and now Tulum.

Soffer says that they picked Tulum because he consulted there for five months, during which time the rest of the bar crew visited and feel in love with the place. It doesn’t hurt, too, that the town on Yucatán’s eastern shore is a top destination for New Yorkers these days, one that is, as Soffer says, “hotter than the Hamptons.”

How to Set It in Motion

Given that the Project’s patio is connected to the indoor space, alcohol, glasses and ice are sourced from within the venue itself. There’s a separate bar setup outside to prep and serve the drinks. And because any good outdoor space is usually overrun during a New York summer, an additional two to three bartenders and waiters are hired for the season, which can run until October.

One year, the owners even enclosed the space and built a wood cabin. It was heated and had a much smaller footprint—seating just under 20 rather than the usual 65 to 70. Fun, no doubt, but the winter annex isn’t in the plan for future patio parties.

Soffer says that while the vibe of the outdoor annex changes, the bar’s drinks philosophy and offerings don’t. He calls it a “bespoke drinks bar,” where there are no menus. Instead, he notes, guests have a general idea of what they want to drink and then put themselves in the hands of the bar’s team.

The focus, says Soffer, is on the bar’s 20 or so fresh ingredients. Most of the cocktails are then created ad hoc based on a specific spirit or style of drink. There is a list of adjectives at the bottom of the menu that includes stirred, spicy, aromatic, savory and sweet. Each adjective is meant to inspire guests’ creative spirit.

Popular drinks, says Soffer, tend to contain hot chiles and fresh fruit—think Thai chiles or passion fruit with tequila or mezcal. The bar smartly added a few more mezcals and tequilas to the list this summer to give the place a more weighty Mexican feel. A simple adjustment, as the crowd was asking for more of those spirits anyhow. 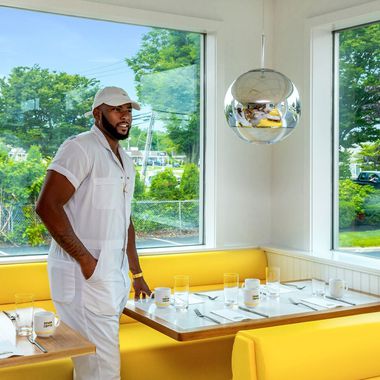 The Subtle Art of the Bar Uniform