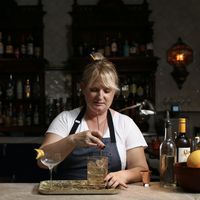 It’s a phrase you hear all the time: Age is just a number. But in the bar world, where you have seconds to make a favorable first impression or capture a sale, that number can be the difference between a successful career and one that’s cut short—or worse, one that never even gets off the ground.

Bar owners and managers usually have an ideal in mind when hiring a team. They think carefully about which qualifications are necessary, whether it’s an ability to lift heavy cases or possess a deep knowledge of a particular spirit or cocktail style. But perhaps more importantly, they have a look in mind. The look of youth.

In my 20 years of working in bars, I’ve come to recognize this look: fresh-faced, well-manicured, overtly stylish, with a general age range of 25 to 35. Old enough to have some experience, in other words, but not so old that the blush has faded from the rose.

Walk into any cocktail bar from Silverlake to Singapore, and you’ll see what I mean. The drinks industry is made up of the young and beautiful. But what happens when qualified bar candidates fall somewhere outside of this golden profile? Are we so enamored of aesthetics that we’re closing the door on real talent? Put another way: Does the booze industry have a problem with age discrimination?

“Over the years, I’ve seen multiple bar candidates, mostly women, glossed over based on their appearance,” says marketing guru and founder of LA Food Fest Shawna Dawson. “You’d usually hear a comment like ‘they’re not right for our program,’ but it’s not hard to read between the lines.” When I enquired about the gender of the hiring managers in question, she elaborated: “In all of the situations I’m talking about, it was men doing the hiring.”

I opened up the topic to my Facebook bar community, to see if others felt they were being denied professional opportunities based on their age and appearance. One person after another came forward with complaints of being snubbed for jobs for which they were qualified.

Veteran New York and Sydney bartender Jessica Diaz says she no longer includes her age on resumés or application forms for fear of not getting a call-back. Another bar vet, Michigan native Malina Bickford, says, ”After a certain age, I started lying about how many years I’d been bartending because I thought it made me sound too old.” Bickford now works as a brand ambassador for a woman-run distillery.

It’s not just women who are feeling the sting of age discrimination. New Orleans bar legend Paul Gustings says he was recently let go from a position he’d held for 15 years with very little explanation. The official story, he says, was a complaint filed by the owner of a tourism guide, but Gustings couldn’t help but wonder if his age had something to do with it. The majority of his colleagues were at least 20 years his junior, and some were in their mid-20s. And since Louisiana is an employment-at-will state, there’s very little recourse for him to file a complaint.

Not all ageism looks the same in the bar world. Gino Pellarin, a well-respected member of the New York and Los Angeles bar communities, says that when he was young he was often passed over for not looking “serious” or “knowledgeable” enough, regardless of his ability.

“I’ve experienced plenty of age discrimination by owners and customers,” says Pellarin. “In the 1990s and early 2000s, practically no one would let you bartend if you were under 30. Patrons would treat you like you didn’t know anything about scotch or how to make a drink.”

By his account, this was a regular occurrence up until about 2011. “It was hard to get a bartending job back in the day,” he says. “People held on to those jobs. But now there are so many restaurants and bars that we barely have enough qualified humans to staff them.”

Yet bartenders with proven chops, men and women, are still being overlooked because of their birth year. “Today, you can run a bar at 27,” says Pellarin. “The industry likes young kids because you can get away with paying them less and working them harder.”

With the recent spate of sexual harassment and discrimination complaints levied against the food and beverage industry, bar and restaurant managers are being more mindful of how and who they hire. Could this be an opportunity for change within the industry? Maybe. Will talented and qualified bartenders still be set out to pasture? Probably.

One thing is for certain, though: Discrimination, in any form, is incompatible with the spirit of hospitality. If recent history is any indication, what may have once been a dirty little industry secret can quickly grow into a glaring spotlight that consumers cannot easily ignore. And that’s when we’ll see real change. Because in the end, the most important number is the one with dollar signs attached to it.