Use Dilution to Add Flavor to Your Martinis

This is how top bartenders are employing the counterintuitive technique.

Chris Amirault knew The Maybourne Bar needed a signature Martini. Set in the lobby of The Maybourne Beverly Hills, the intimate cocktail bar opened late last year as the American sister of The Connaught Bar in London, a Martini mecca, which at the time ranked number one on the list of World’s 50 Best Bars.

“Trying to figure out how to even get in the same conversation as what Ago [Perrone], Giorgio [Bargiani], and Maura [Milia] do over there is a tall task,” says Amirault, referring to The Connaught’s power trio of bar leads.

In considering how he could distinguish his Martini, Amirault kept coming back to the idea of replacing the drink’s standard dilution with something flavorful. After stirring, Martinis, after all, are 30% to 40% water. “Water is one of the most important aspects of a cocktail,” says Amirault. “And it’s often the most overlooked.”

Eventually, Amirault landed on substituting clarified cucumber juice for the water in the batched and chilled The Maybourne Martini. To achieve nearly clear cucumber water, he peels half the skin from a case of cucumbers, juices them, separates the pulp and pectin from the liquid with clarifying agents, and spins it all through a centrifuge. Combined with Sipsmith gin and Dolin dry vermouth, “It looks as if someone shook three ounces of Grey Goose,” says Amirault. “But once you taste it, it knocks you off your horse a bit.”

Amirault’s Martini counterintuitively and surreptitiously uses dilution to punch up flavor, and it’s the product of decades of industry innovation and a poster child of pandemic-era bar trends. And he’s not alone. More and more bartenders are experimenting with flavorful Martini dilutions thanks to high-tech clarification techniques (pioneered by Dave Arnold), the rise of freezer Martinis (starting with Salvatore Calabrese in the 1980s and popularized by The Nomad Bar), and the drinking public’s current Martini obsession—and that’s not to mention influence from to-go cocktails and the no- and low-ABV movement.

First, There Was Tomato Water

Of course, Amirault isn’t the first bartender to dilute a Martini with clarified juice. Tomato-water Martinis have been around for decades. More recently, in 2019, L.A.’s Thunderbolt opened with The Liquid Picnic, a combination of London dry gin, lemon and rosemary liqueurs, dry vermouth, clarified tomato water dilution, salt, and pepper.

The same year, Will Wyatt devised Doctor Angel Face for his then-new bar program at Mister Paradise in New York City. He built the Martini riff with barley shochu, verjus blanc, fino sherry, and a 40% dilution of kombu-infused tomato water. It was Wyatt’s first time working with tomato water, and he found that using it for dilution rather than incorporating it into a modifier delivered the intense tomato flavor he was looking for. Plus, tomatoes are a breeze to clarify, a boon for high-volume bars.

Batched cocktails of all sorts have been gaining momentum for years, and during the pandemic, they became a lifeline for American bars selling cocktails to go. Bartenders, many for the first time, had to consider how people would experience their drinks at home.

“I started thinking about dilution differently at that moment,” says Takuma Watanabe, the owner of Martiny’s in New York City, who produced a barley tea to dilute a brown-butter-corn Old Fashioned at now-shuttered Angel’s Share. “Our customers, of course, weren’t professionals, so we calculated the right amount of dilution so they could put it in the freezer and just pour.”

And if he could control dilution so precisely, why not add flavor?

When devising a to-go 50/50 Highclere Martini at Oak Nashville, beverage director Kala Ellis found a simple way to deliver the flavor of an expressed lemon twist without asking guests to spritz a peel themselves. She rested lemon zest in water and then diluted the batched Martini with the citrusy water—a technique that would work with any citrus peel, she says. Ellis also started asking Oak’s kitchen crew to save the water they used to rinse rice. “It adds a lot of weight and texture to a cocktail without drastically changing the flavor profile,” says Ellis, who’s used rice water in Martinis and Old Fashioneds.

For Dirty Martinis, she doesn’t bother filtering the rice water—the batched drink just needs a little shake to agitate the particles—and if she wants a crystal-clear cocktail, Ellis passes the rice water through a coffee filter, which removes some but not all of the body.

These types of batched drinks, and the creative dilution that comes with them, will long outlive the pandemic, says bartender Justin Lavenue of The Roosevelt Room in Austin. “You get greater consistency with batching; there are no bartender variants,” he says. “And if you have the storage space to keep things chilled, it speeds up service.”

In the Martini realm, Lavenue has used aloe and coconut waters for dilution, the latter of which he loves for its nutty finish. “Coconut water is a great way to enhance so many vermouths that have an almondy-walnut finish, and it pairs wonderfully with sherry,” he says. He recommends testing the sugar levels, or Brix, in coconut water with a refractometer and adjusting the vermouth or sherry types and ratios accordingly.

Lavenue first experimented with flavored dilution more than a decade ago, when bartenders started dropping ice cubes made of teas, juices, and other infusions into whiskies and stirred cocktails—an interesting but inconsistent technique. And he started to think more about potent dilutions as he developed nonalcoholic drinks like Roosevelt Room’s long-running N/Artini, a Martini batched with Seedlip Spice 94, loads of botanicals, verjus blanc, a splash of castelvetrano olive brine, clarified pear juice, and juniper tea.

Too much straight H20 doesn’t do any favors for nonalcoholic drinks. “Water opens up the nuance in a whiskey and brightens up and opens a gin Martini. But with spirit-free, if you’re adding to this beautiful spiced tea base, you’re diluting that,” says Julia Momose, a pioneering N/A drink-maker and the owner of Kumiko in Chicago. “With spirit-frees, you don’t need much water.”

Momose’s N/A techniques have also influenced boozy bartending, and Watanabe credits Momose’s cocktail book, The Way of the Cocktail, for inspiring the latest crop of drinks diluted with teas and infusions.

Nashville bartender Jon Howard’s dilution is also heavily influenced by advancements in the N/A movement. Looking at a bottle of Seedlip Grove one day, he wondered what it would taste like as the dilution in a classic Martini build. “It was incredible,” says Howard, the bar director at Audrey, June, The Continental, and The Vesper Club. “With the breadth of N/A spirits I can now utilize, I have a way to take Martinis in directions I never could by using standard dilution practices.”

Howard has developed Martinis diluted with Wilderton Earthen and Bax Botanics Sea Buckthorn. He worked the latter into a wet Martini cousin at June, combining it with Ford’s gin, Dolin dry vermouth, and a frozen sea buckthorn.

He’s currently serving a batched Martini with 1 ounce of Pentire Adrift, 2 ounces of gin, and 1 ounce of dry vermouth, held in a freezer, poured into a chilled coupe, and garnished with seaweed for an “oceanic, almost Dirty Martini-style drink,” he says, noting that an ounce of an N/A spirit with a two-to-one ratio of gin to vermouth works 90% of the time, but if you freeze a lower-ABV or 50/50 Martini, the mixture will turn solid.

Priced in the mid- to high-$30 range, nonalcoholic spirits are considerably more expensive than water, but Howard prizes them for their consistency, visual clarity (ideal for Martinis), and low labor cost. Even though he has all the tools he needs to make distillations and infusions in-house, he’d rather be spending his R&D efforts elsewhere. “Time is an expense you can’t get back,” he says.

It’s impossible to know how many bartenders are tinkering with flavored Martini dilutions, but it’s safe to say that it’s a relatively new phenomenon and one ripe for exploration. Wyatt is thinking about developing a clarified snap pea Martini for spring. He’s worked with buckwheat, pu-erh, and shiitake teas, and loves the idea of incorporating into a drink the juice from salt-pressed cucumbers, one of his favorite Szechuan dishes.

“It’s something I want to play around with a bit more,” says Wyatt. “But I choose my prep battles wisely.”

Other bartenders suggested celery and tomatillo waters, and for a lighter touch, Ellis thinks simple cold-water infusions with things like ginger, celery, yellow squash, and cucumber could play well with Martinis.

For his own personal use, Watanabe wants to push a 50/50 Martini’s ABV even lower, dialing down full-strength gin by half or even three-quarters and then diluting with a N/A gin. “I’m a low-ABV person, but I still want to drink Martinis with cool flavors,” he says.

A decade ago in L.A., Amirault says, cucumber Martinis made with Hendrick’s and St. Germain had a moment; his Martini at The Maybourne Bar is, in part, an ode to that drink, even if the original wasn’t particularly balanced or good. Similarly, he can envision taking the juice from high-quality canned Thai lychees and using it to dilute and update the ’90s-era lychee Martini.

“When it comes to innovation, 99.9% of stuff has already been done,” says Amirault. “It’s hard to come up with new techniques. But if you’re somebody who comes up with 100 cocktails for multiple outlets a year, you have to start looking at drinks in a vuja dé style. It’s the idea of seeing the same thing over and over and over again but still being inspired by it. That’s been the most helpful thing for me, looking at something I see all the time with a fresh perspective.” 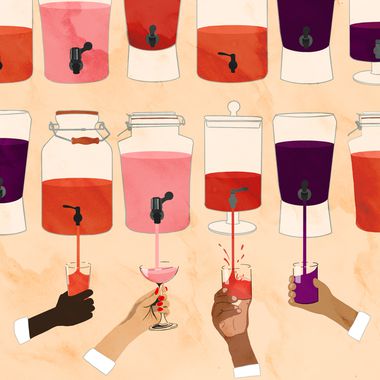