There’s a version of the wormwood spirit for every palate and cocktail.

Part of why absinthe has long been so misunderstood sits squarely with its main and most controversial ingredient, wormwood, or artemisia absinthium. At its core, however, absinthe is really all about its bevy of other botanicals and the fragrance and flavors they bring, which can include fennel, green and star anise, melissa, hyssop, angelica, lemon balm, coriander, mint, and artemisia pontica (petite wormwood), among others.

Arguably, another reason absinthe remains an enigma is that, in some ways, it suffers from ill-defined parameters: There are differing standards and definitions of the spirit from country to country, and no limit on where absinthe can be produced, only a stipulation that it needs to contain certain ingredients.

Wormwood is one of those ingredients. Historically, it’s been used for medicinal purposes, and extracting the plant’s innate alleviating properties dates back thousands of years, when Greek medical figures like Hipprocates used it for everything from menstrual cramps to rheumatism. Although Switzerland is considered the birthplace of the once-controversial high-octane spirit around the 1790s, it was during the years of Belle Epoch Paris in the late nineteenth and early twentieth centuries that it went from panacea to pariah.

Overindulgence made drinkers of the Green Fairy act more like the green-hued Hulk. Frequent bad, sometimes violent, behavior after the consumption of absinthe created an outcry that caused the spirit to be outlawed in all of Europe and in the United States, too. The blame rested on an ingredient that exists in wormwood and its variants: thujone, a terpene that is safe in small quantities but, like many things, is not great for the body or mind in excessive amounts.

Modern-day researchers have found, however, that no absinthe—historical or modern—contained enough thujone to make a person do something like, say, sever an ear. Only drinking too much alcohol could potentially do that. Absinthe became legal in the E.U. once more in 1988, with limits on the amount of thujone in the mix, and in the United States in 2007. (In the U.S., products labeled absinthe must be thujone-free, containing only trace amounts of the chemical.)

Re-legalization created a slow-but-exciting renaissance of the herbaceous drink, both in the U.S. and abroad, and a renewed respect for the traditional manner of serving it: About an ounce is served in a glass with a slotted, flat absinthe spoon sitting over the top with a sugar cube on it. Slowly, cold water is dripped onto the sugar so it dissolves into the spirit, invigorating the flavors of its botanicals and diluting the often-high-ABV spirit into something more easily enjoyable and creating the opalescent appearance known as louching. Alternatively, many cocktails, classic and modern, call for the spirit.

These eight bottles, mostly American in origin, provide a great introduction to exploring the spirit.

At the end of 2020, this Provence-distilled brand re-launched its packaging, popping the 55% ABV bottle in a box decorated with an image of Vincent van Gogh and with a little absinthe spoon attached, cleaving to the fictional stories that attached absinthe to outlandish behavior. Its color seems a little too green to be true—a bright neon-ish lime (which, when louched, becomes a pretty pale milky green), and indeed, the back label says the spirit contains the dyes Yellow #5 and Blue #1; it also contains sugar. These two issues can form an argument that this bottle isn’t a true absinthe. Still, it has pleasant aromas of fennel candy, eucalyptus, coriander, and lemon, which also come through on the palate.

The slender, tall bottle is more like that of eau de vie than what you’d expect for absinthe, and this certified-organic producer stands apart in other ways, too. The clear spirit is distilled at Marian Farms in Fresno, California, using biodynamically farmed grapes. The anise in this 55% ABV bottle is subtle and laced into other minty, citrusy botanicals, along with a pop of sage. It’s soft, sprightly, and fresh.

You can’t talk about absinthe in America without mentioning T.A. Breaux, whose Lucid Absinthe Superieure was the first to be released in the U.S. after it became legal again in 2007. Breaux is an absinthe archeologist and evangelist, hunting down old, celebrated recipes to recreate them. As its name implies, Jade 1901 comes from a recipe dated to that year in the turn of the last century and, as with Breaux’s other bottlings, distilled in Saumur, France at the Distillerie Combier. Jade 1901 is easily the most complex and sophisticated of the bunch. Its color is true chartreuse, and its aroma is out-and-out savory: musk, leather, and rye bread On the palate, it has flavors of toasted fennel seeds and sweet spice. Louching not only tames the 68% ABV but also draws out a little bit of sweetness and a long, satisfying anise finish.

Chilean pisco provides the spirit base of this golden-green-hued absinthe. The standard grand wormwood, anise seed, and fennel form the main botanicals in this bottle, front and center in the aromatics, and its springlike color is drawn from steeping the 65% ABV spirit with hyssop and lemon balm. Louched, it becomes opalescent and drives the fragrant fennel to the front and center. It’s soft and full on the palate, with a pleasantly sweet, grassy finish.

As its name implies, this Minneapolis entry into the category is clear as water—until you add some to it and the combination renders the liquid a lovely pale, translucent opal. This is a good bottle to try if you’ve new to the absinthe category. It’s fresh and floral, like fresh fennel, with bright notes of marjoram and lime peel and an organic corn base spirit. With the appropriate amount of water added to this 60% ABV spirit, it picks up some pine forest and wildflower aromatics.

This bottle from Philadelphia Distilling has a neutral grain spirit base and a green-tinged golden color, and it clocks in at 60% ABV. It features pretty, sweet floral notes here, and its list of double-macerated botanicals is lengthy and intriguing: grand and petite wormwood, green anise, star anise, fennel, lemon balm, genepi, hyssop, coriander, and spearmint. The coriander and mint in particular hit the nose, with a bit of muscled muskiness humming beneath. Louche it and it takes on notes of fresh chamomile.

A spirit of fun pervades the fresh liqueurs and spirits that come out this Texas distillery, which is responsible for the state’s first-ever absinthe with a duo of releases. The Emerald is high-proof at 70% ABV and is packed full of flavor as well as alcohol. It’s the color of a peridot stone once louched, and its 17 herbs come out to play in the grape-based spirit with multilayered aromas and flavors of dried fruit, anisette biscuits, fresh mint, pink grapefruit, and Thai basil, all of which leave a satisfying bitter finish.

This bottle is a stripped-down version of the company’s Emerald. And unlike its big sister, Opal is clear straight out of the bottle and when louched takes on the tone of milk glass. It’s lower in alcohol, at 55% ABV, and is more straightforward in its botanicals. Its dominant aroma and flavor is anise, but adding cold water teases out a floral quality and a bit of sweetness and stirs up a citrusy, minty, fennel-frond finish. 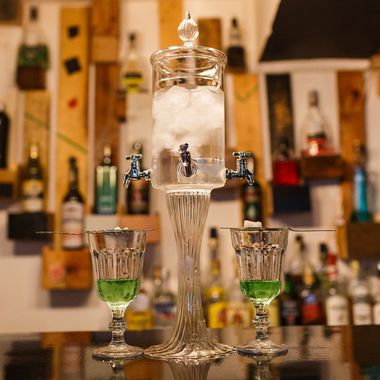 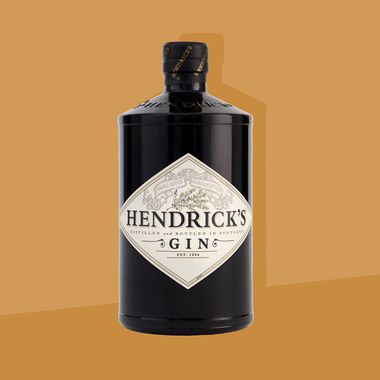 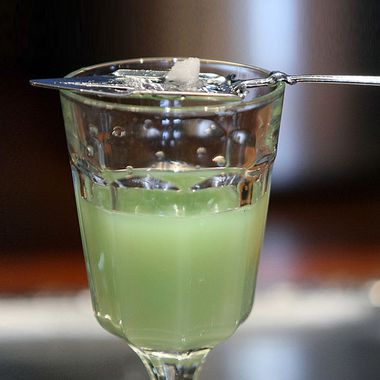